Placemaking at the heart of Stockholm 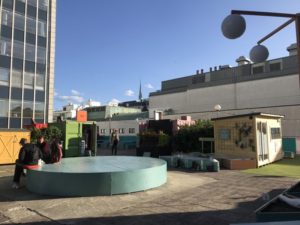 Why do public spaces and placemaking matter? Where could it be done?

Elise Perrault from Future Place Leadership co-organised a placemaking event at the heart of Stockholm at Högtorgterassen. This is a rooftop of a building that is in the very heart of the capital and has been closed for people about 40 years. Since 2015, it has been opened to events, urban plants, yoga, art and much more.

The event focused on placemaking, celebrating the success of Högtorget and talking about why and what public spaces can achieve.The goal was to share experiences and tools for citizen dialogue. It was an initiative of the European Placemaking Network, of which Future Place Leadership is a founding member, in co-operation with Glad Stad and Föreningen för samhällsplanering.

The one key message from the event: people are key. They are the measure of the quality of a public space and can help tell whether or not a place is safe, attractive and inviting – or not.

Here is an article from Syre that covered the event (in Swedish).

News on our work with placemaking.

Video interview with Ethan Kent on the economic benefits of placemaking.