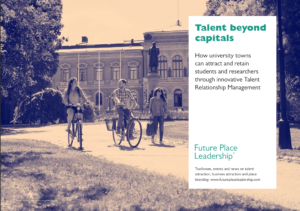 Over the past decade or so, university towns across Northern Europe have gradually increased their efforts to attract and retain university graduates and scientists. This is for good reason. University graduates and scientists are a key driver of innovation and economic development, and are closely connected to the wealth and affluence of towns and cities, according to a large number of studies. However, many challenges still persist for university towns. Even though exact figures are hard to come by, our interviews with representatives of universities and university towns reveal that up to 70–80% of all students leave their place of study after graduation, often to move to a larger capital or metropolitan region.

Lack of jobs is typically not the main reason – this happens despite the fact that the local economy lacks qualified labour.

This instead points to a mismatch between the academic and business sectors as one explanation. This is obviously a lost opportunity for the local economy of university towns.

The purpose of this handbook – stemming from a Baltic Sea Region co-operation project funded by the Swedish Institute – is to inspire and provide concrete tools for universities, city governments and business associations to enhance their efforts to attract and retain students and researchers, as well as facilitate more seamless mobility of these groups. A special focus is on how non-capital university towns can improve their efforts in this regard, especially in the Northern European Baltic Sea Region.

Case studies of practical examples of tools and strategies in use are used to inspire and promote action among the readers of this handbook.

Here’s what we are currently doing in the field of talent attraction.

Contact Morten for more information on talent attraction and for a free consultation.